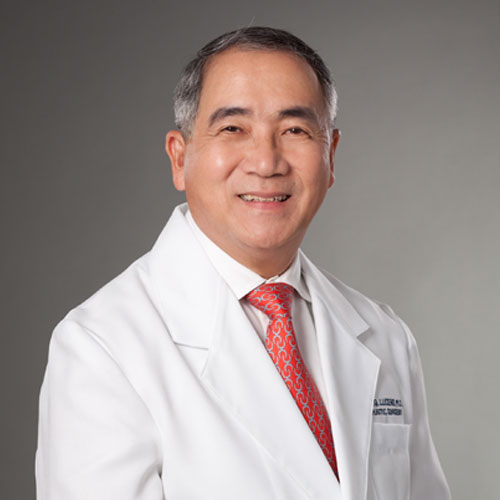 With a career spanning over 30 years, Dr. Florencio Lucero is one of the longest practicing Filipino plastic, reconstructive and aesthetic surgeons today. He is considered an authority among his peers in the industry.

Dr. Lucero had his humble beginnings in 1970 when he received his degree in medicine from the Far Eastern University Institute of Medicine. He took the Physical Licensure Exam fresh out of college, placing 7th in the country.

He accomplished his general surgery and plastic surgery residency in 1973 and 1975, respectively, at the U.P. Philippine General Hospital. He then went to Pennsylvania, U.S.A for another year of general surgery training at the Eaton Hospital in 1976.

His quest to learn more about the medical field did not stop there. He attended two fellowship programs within three years: the Burns Surgery Fellowship of the Cook County Hospital in Illinois (1976-1977) and the Aesthetic Plastic Surgery Fellowship Program of the Straith Clinic in Michigan (1977-1979).

For 32 years, Dr. Lucero has been a dedicated surgeon at the U.P. Philippine General Hospital. He even became the Chief of Plastic Surgery at the institution for 17 years. He is also affiliated in several medical facilities, such as St. Luke’s Medical Center, Manila Doctors Hospital, and Beverly Hills Medical Group, to name a few.

He pioneered Regenerative Cell Therapy in the Philippines, performing it to patients with degenerative conditions such as diabetes mellitus, Parkinson’s disease, Alzheimer’s disease, and cardiomyopathy.

Since 2010, he is the Secretary-General of the Oriental Society of Aesthetic Plastic Surgery (OSAPS), where he is also a founding member and served as President in 2009.

Furthermore, he is a part of the Brazilian Association of Tissue Engineering and Stem Cells Research (ABRATRON), International Federation of Adipose Therapeutics and Science(IFATS), International Society of Plastic Regenerative Surgery (ISPRES), and Philippine Medical Association, (PMA).

Dr. Lucero wrote and published several medical studies. He is also a sought after speaker in 19 international conferences in Singapore, Thailand, Japan, and Australia.